The apparent attack on the two tankers in the Gulf of Oman this morning serves as a warning tensions in the region are clearly escalating.  Last month, four tankers were attacked off the UAE coast in the Gulf of Oman.  In this attack, limpet mines were placed below the waterline of each ship.  (A limpet mine is a relatively small magnetic explosive attached to the hull of the ship.)  No casualties came from any of the four ships but as you can see from the pictures below, each ship had a nasty hole blow into the hull of the ship.

In today’s attacks, which were much more dramatic in several ways, the most obvious of which is that the MV Front Altair seemed to be targeted and, once attacked, left abandoned and on fire.  By targeted, I’m assuming that to be the case based on its track as shown below: 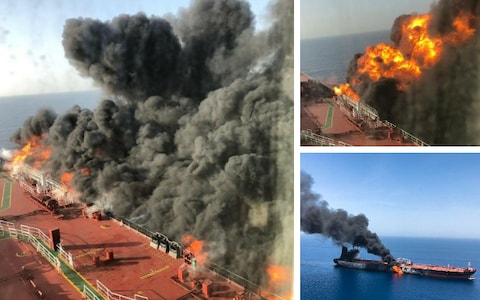 Obviously, for all but the least informed, Iran comes to mind as the most likely suspect behind each of these attacks.  That is not to say that they are the only ones capable of this, because they aren’t.  However, it would take a cynical mind, though probably not much of one, to think the Saudis would do something like this, i.e., to fan the flames – pardon the pun – of the tension so thick in the region right now that they’d try to instigate some type of US military action against the Iranians.  It would take an even more cynical mind to think Mossad would be behind this to again, drag the US into a strike against Iran.  However, as Tyler Rogoway indicated in his excellent article, which can be read here, the region is so rife with ISR (Intelligence, Surveillance & Reconnaissance) that I don’t think it will take just too long to determine what happened.  Indeed, Secretary of State Mike Pompeo has already publicly claimed Iran bears responsibility for this, as was the case last month.

If, indeed, Iran is behind this, and I for one believe they are, the obvious question – which no one is asking – is What Now?  Unlike the benign missile tests of the North Koreans – and by “benign” I mean no one has gotten hurt and no one has sustained any property damage – these two attacks clearly have inflicted property damage, with the fate of the MV Front Altair still to be determined, and, while no one was hurt in today’s attacks, it looks as though it could easily have been otherwise.

So, again, Now What?  The US already has some pretty stiff economic sanctions on Iran.  In spite of these, Iran, it would seem, continues to lash out without regard for property or people.  More to the point, the US is not shying away from laying the blame right at the feet of Iran.  Obviously, a military strike is always “on the table” as the saying goes.  However, if this were to be the preferred option, we’d have to literally take out all of Iran’s offensive capability for striking back at any target of opportunity in the Gulf.  This would take one massive effort–if it could even be done–and at this point in time, I don’t see that US has even begun to move the pieces into position for something like this.  What I believe is presently the most likely scenario is the tightening of the sanctions currently in place.  This would require all of Europe to join the US, almost like the united front President George H W Bush put together for Desert Storm – only this would be a Gulf Storm with the means of power being economics and not military.  And, if Iran continues on their present course, it might just happen.